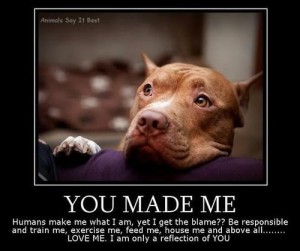 In recent years the Pit Bull breed has been at the top of the spotlight. We’ve all seen the headlines splashed across the TV and newspapers. Essentially pointing out that there has been yet another “Pit Bull mauling” somewhere in the world.

Pit Bulls haven’t been the first dog breed to be named “most dangerous breed” by any means. The 70’s was the decade of the deadly Doberman Pinscher.  The 80’s declared the German Shepherd as the breed to stay away from.  The 90’s brought attention to the super bad Rottweiler!  As time passed, opinions changed and now it is the Pit Bull’s turn to take the heat.

No one can dispute that there have been many dog bite attacks by dogs classified as “Pit Bulls”. One issue is that many dogs get labeled as a Pit Bull, even if they are not. They may resemble the breed or have some Pit Bull genes, and they automatically get thrown into the Pit Bull pool. In other words, breed identification is often subjective.

Although it can happen it is very rare that a dog will be inherently vicious, regardless of breed. When raised and properly trained and socialized by a loving family, Pit Bulls can be amazing family pets! They are known for their loyalty, strength and playfulness.  Sadly, these same traits can be used against them.

Pit Bulls have become extremely popular resident dogs for irresponsible and unsavory people. These people are attracted to the Pit Bull’s tough and violent image.  They enjoy owning and promoting them as the ultimate junk yard dog! These types of owners want people to be afraid of their dog.  The mind set is that if they are recognized as being able to control that vicious animal, then they should be feared as well! Criminals thrive on that type of reputation.  They not only encourage the aggressive behavior, they demand it!

With all of the bad press these dogs have received over the last decade, it is no wonder why shelters and rescues are overflowing with Pit Bulls who have been discarded, or worse! Because of their reputation, they also have a hard time finding a loving home once they are in that situation.

To judge by breed alone is inhumane! A recent test was done by The American Canine Temperament Testing Society and Pit Bulls achieved a passing rate of 83.9%. That ranked them 4th from the highest of 122 different dog breeds. The average passing rate for all breeds is 77%.

A report from the American Veterinary Society of Animal Behavior included the following statement: “Breed alone is not predictive of the risk of aggressive behavior. Dogs and owners must be evaluated individually.”  We couldn’t agree more!

The bottom line is that Pit Bulls are more likely to be abused and killed by humans, than the other way around!